The Property on Midland Bay

Before there was a clubhouse, there was the deck at the Burt-Gerrans cottage near the lighthouse at Midland Point. See Coming Together to learn more about the club’s formative years. 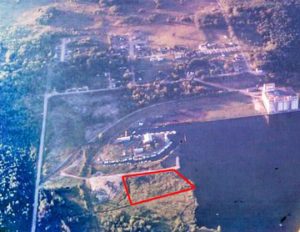 As John Daniells describes in Coming Together, the Midland Bay Sailing Club was formed as a fellowship of racing-minded sailors in 1967, and functioned without a property for several years. Discussion of securing a land base, which proved controversial, began in 1972. The following photos show the present Midland Bay Sailing Club property (marked approximately in red), before and soon after the property was leased from the town of Midland in 1974. For a detailed narrative of these critical years in the club’s history, see The 1970s: A New Beginning by Ted Symons.

In 1973 , the property that would be offered to the Midland Bay Sailing Club for lease by the town of Midland was a patch of wild land with a creek and marsh. The land would have to be reclaimed before anything could be built. On its north side, where Bay Port Marina now stands, a private marina had been developed. Our early club members recall it being operated by Great Lakes Boats and Machine and later by Tom Lackie, and carrying the names Sunnyside and French’s Marina. The club’s first haulot after the completion of the mooring field was by crane at the western end of this marina’s south basin. On the south side of the propose club property was the future Pete Peterson Park. 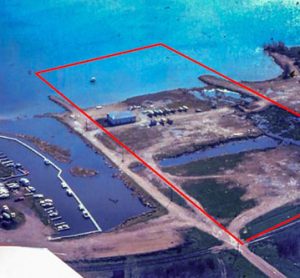 The club signed a lease agreement with Midland Board of Parks Management in 1974, and by the spring of 1975 (left) considerable progress has been made in reclaiming the property. The breakwall has begun and will extend 143 feet by June. The clubhouse has appeared.

In 1977 (below) the breakwall has been greatly extended and an inner basin in the present area of C dock is dredged. A condition of the club’s lease is that it provide a channel to a public launch ramp next door at Pete Peterson Park. This obligation would be fulfilled in 1980, and would allow the creation of A and B docks in the present lagoon. For now, club members anchor their boats in the mooring field that with the future right-angle extension of the breakwall will create the sheltered basin for F, G, H, and J docks as well as the dinghy docks and Sailing School facility. The sailing school however had already begun operating at the club’s new land base. 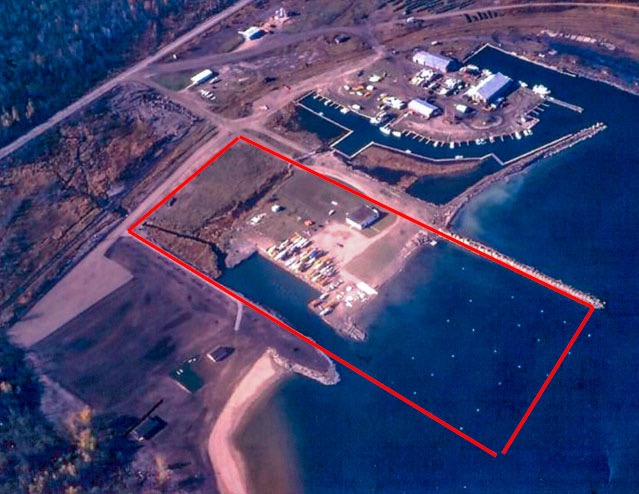