Coming Together: A Racing Fellowship Creates a Clubmbscadmin2020-10-20T01:15:45-04:00
In 1964, competitive sailing came to life in the Midland area with the arrival of Vic Carpenter and Jan Gougeon, professional boat builders from the Bay City, Michigan area. Vic was the pioneer of epoxy and probably the best wooden boat builder in the world, with a boatyard in Port McNicoll. Jan was a world-champion DN iceboat racer and co-founder with his brother Meade of the WEST System Epoxy Co., which was soon a leading research and development company in epoxy manufacturing and application techniques.Vic encouraged everyone to sail and introduced many of us to racing. Vic promoted sailing with a number of articles in the Midland Free Press. Sometimes his advertising was radical, as when he told me he would take me for one ride on his E Scow; then I could stand on the shore with my tongue hanging out until I purchased one. Another time, he yelled across the water to Gordon Lightfoot, sailing his fiberglass Ericson 39, Sundown: “Gordon, would you play a fiberglass guitar?” 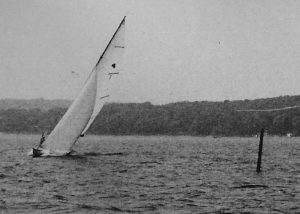 In 1965-66 I sailed my Opti type pram, raced a Sunfish and crewed on other boats, sometimes making plastic sails out of 2-mm polyethylene for slower boats I was asked to sail on. Iceboating was popular in the winter and Vic, Jan, Jim Playfair, Dr. I.T. (“Ike”) Weldon and I raced our own DNs.

In 1967 there were enough interested boats to have regular weekly races. Vic suggested starting at Snake Island buoy, halfway between Port McNicoll and Midland, on Sundays at 1:00 pm. (This buoy was on an extension of the centreline of the island, about half a nautical mile southwest of the southwest end.) The course was to the red can on Midland Bay, the red stake off Flat Point (since discontinued), and a finish at Snake Island buoy. Usually this meant a reach, a reach and a beat to the finish. With two long reaching legs the boats were close together and it was a big social on the water.

In 1967, Dr. Weldon hosted the first awards presentation on his waterfront lawn in the northwest corner of Midland Harbour, near what was known as Portage Park (now McCullough Park), which was once one end of the canoe portage from Midland to Penetanguishene. At Vic’s recommendation, Andy Amos, age 65, was the recipient of Copper Flower Pot for the most consistently good sailor in his custom 14-foot dinghy. At this time there was much discussion about more organized races for 1968.

After many weekly classes and much discussion, the class encouraged me to put a notice in the Midland Free Press inviting anyone interested in forming a sailing club to attend a meeting at John Daniells’s house, November 23, 1967.

The meeting was full of surprises, especially the numbers, and when I was going to my neighbour for more chairs I missed some discussion on handicapping. The general feeling was excitement that so many people were in favour of forming a club. I was still moving about when I heard Murray Wagg nominate Terry Burt-Gerrans, Bill Snyders and John Daniells to form an executive to further develop a sailing club with a boat handicap system.  I heard Cecil English second the motion but I just kept moving as I could not believe it. I heard the clapping of hands and came into the living room to be asked what I thought. I said Terry Burt-Gerrans should be chairperson and thanked the people. Jim Playfair immediately said that we had to have a real meeting at his place.

I was embarrassed as there were many people better qualified to form an executive, such as Murray Wagg, whose family had built ships for World War II, owned the Midland City (the 120-foot ship built in 1870 that had arrived in Georgian Bay as a steam side-wheeler and is now buried somewhere beneath what is now Wye Heritage Marina), and was an amazing seaman; Vic Carpenter, the most knowledgeable sailor of us all, who deserved the most credit for promoting local racing; Jim Playfair, whose family were the main founders of Midland, with their lumber business and shipyards; Cecil English, the CEO of a local transport company; and many others.

With the realization of an executive, a motion was passed to call the club Midland Bay Sailing Club rather than yacht club, so it would stay sailing oriented and appear more approachable. After the meeting, Dr. Weldon showed slides of past summer sailing on my dining room wall and was a great help.  Everyone seemed pleased about the launch of the club.

Over the next few days I received a lot of phone calls. The most stressful came from Vic Carpenter’s supporters, who told me I railroaded the meeting. They felt the meeting was premature and that I was ruining sailing on Georgian Bay. After the meeting at my house, Vic was upset that he was not appointed to lead the sailing club. Vic opposed Midland Bay Sailing Club and ridiculed our organization for using a boat handicap system.

At the second meeting, on January 18, 1968, at Jim Playfair’s house, Murray Wagg re-nominated Terry Burt-Gerrans as chairman, myself as vice-chairman and Bill Snyder as secretary-treasurer. This executive was seconded by Cecil English and approved by a large majority. Cecil English moved that we add four directors and the members chose Paul Noak, Cecil English, Andy Zuidema and Martin Cook. 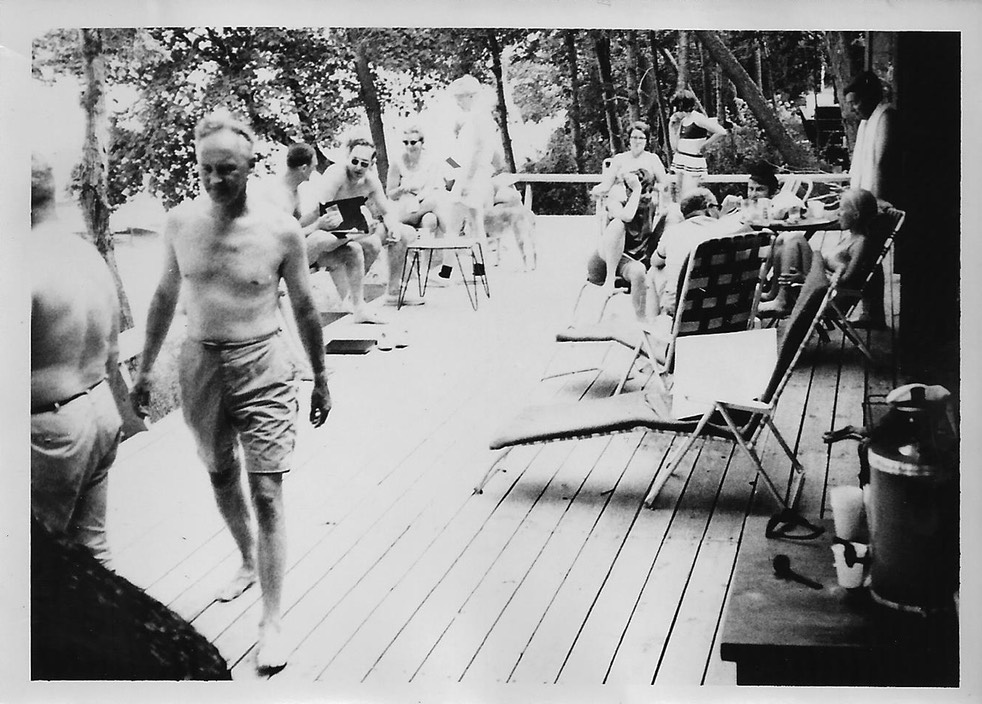 Vic found ways to express his displeasure with the new organization. As Murray Wagg had nominated the executive, Vic designed and made a flag displaying Wagg’s Yacht Club Cleaners, as Murray Wagg owned a laundry. Vic also designed and built Bahala, a keel-centreboard sailboat the same size as Waggs’ C & C Corvette, for Gordon Moss, and she flew the Waggs Yacht Club Cleaners flag. A few years later, Vic respected the effort of the club and competed in many of MBSC races.

The Burt-Gerrans deck, which was just north of the lighthouse at Midland Point, overlooked the finish line at Snake Island buoy and was the main post-race party place for a few years. Cecil English provided old fifth wheels off his transport trucks for moorings in deep water close to shore at the Burt-Gerrans property. C&C Corvettes were the big boats in those days, and if you had no mooring you rafted to the 31-foot Corvettes in the shelter of Midland Point. 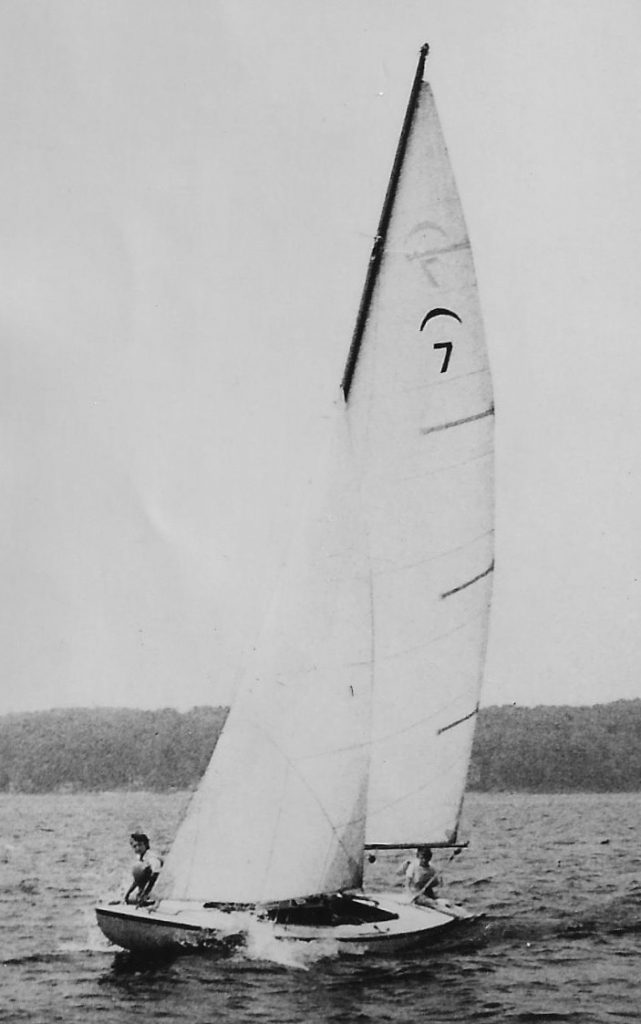 Most boats were crewed by the family. Many happy children became our junior sailing students and instructors.

Social gatherings were also enjoyed at the homes of Dr. Weldon, Steve Cerney and myself, at Murray Wagg’s cottage at Minnicog, and at Portage Park Beach, Downer’s Yacht Haven on the Midland waterfront where Central Marine is now located, Brooklea Golf Club, the original YMCA in downtown Midland and Beausoleil Island.

A popular spring social event was hosted by Dr. John Corcoran and combined proposed racing schedule for the year. There was a great deal of input from skippers regarding courses and handicaps.

Downer’s Yacht Haven played a big part in promoting sailing from 1966 to 1971. Many times Bruce Downer provided the committee boat and Hazel Daniells was race official. In the early 70’s, Downers offered part of their store building for a sailor’s clubhouse. All regular racing keelboats hauled at Downer’s. In the fall, Downer’s would burn an old wooden boat, celebrating the life of said boat, and creating a social, with a corn roast.

Almost every night boats would sail on the bay from Downer’s Yacht Haven. If you did not have a boat, you could crew. Often crew and food were picked up at the Dock Lunch bar and the south wind was enjoyed, well after dark.

In the late 1960s, early 1970s, sailboats were appreciating in value. A new C&C or Alberg was launched every month, with socials at launches. Summer time was party time at the waterfront.

Organizing committee boats and race officials was a weekly task. Volunteer help for races was appreciated. Power Squadron members, Dave Hudson and Lionel Hanmer, started many races and rescued sailors with hypothermia in a spring storm. Cecil English with his launch Blue Chip, Downer’s Yacht Haven and others were also a great help.

In 1969 the club purchased a damaged steel pontoon boat from Norse Boat Works in Penetanguishene. The boat was repaired and served the club well for many years.

With more boats and interest, the club added distance races. Most notable was the Hope Island Race, with an early morning Saturday start.  This race was popular for many years, even though it sometimes lasted for 24 hours.

The Western Island race, was also known as “the Edge of the World race," because the Western Islands were indented in the margin of old chart 2283 (Waubaushene to Western Islands). With normal northwest prevailing air, a Friday-night start meant you reached the island in daylight on Saturday. However, a few years in a row, southeast moderate air resulted in boats rounding Double Top Island in the dark, with nearby islands difficult to see.  A few boats were apprehensive and sailed home, disqualified for not rounding the island. As many boats were crewed by family, who did not appreciate the challenge, the race was discontinued.

The club used the St. Lawrence Valley yacht handicap system, promoted by Sicotte Hamilton, whose family raced in the Montreal area and now lived in Orillia. Sicotte also encouraged us to join the Canadian Yachting Association, which I believe we did in 1968.

One design class racing was initiated with Albacores in 1968. Sharks were involved with racing from the beginning. An E Scow fleet was racing in 1969. Four corvettes were racing in 1969. A Soling fleet was formed in the early 1970s.

As this story describes, John Daniells was one of the founders of Midland Bay Sailing Club, serving as vice-chairman of the first executive in 1968 and as the first Commodore in 1969. John has competed in a wide variety of boats and classes, including Sunfish, DN iceboats, E-Scows, Stars, and two custom designs by fellow club member Steve Killing, the 40-foot Chariot and the 50-foot To Life, both of which John built in his Midland welding shop. John was made a Life Member in 2007.